WHAT IS SWARM INTELLIGENCE?

The way in which animals can coordinate their behaviours has always fascinated and intrigued the humans, the way in which thousand of birds can fly together like a single organism, the complex bee structure or the perfect syncronized flashing among fireflies have been study object since ancient time.

Just the synchronized flashing among fireflies has motivated the earliest documented description of a biological system (1727) from the physician Engelbert Kaempfer that comparing their flashing movement to the human heart movement writes:

“ ….having taken possession of one tree, and spread themselves over its branches, sometimes hide their light all at once, and a moment after make it appear again with the utmost regularity and exactness, as if they are in perpetual Systole and Diastole.”

The expression Swarm Intelligence was introduced by Gerardo Beni, a professor of electrical engineering at University of California and Jing Wang in 1989 in the context of cellular robotic systems.
The concept infact initially was employed in work on artificial intelligence, and then applicated at biological systems. 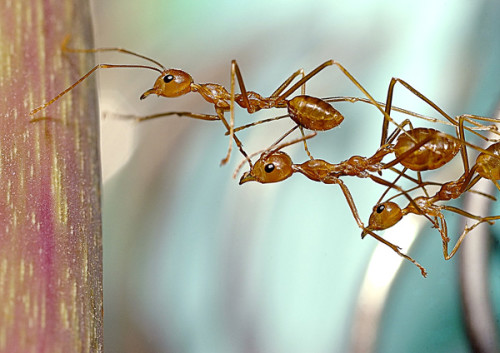 “Swarm Intelligence system consist typically of a population of simple agents, naturals, interacting locally with one another and with their enviroment. Interactions between such agents lead to the emergence of “intelligent” global behavior, unknown to the individual agents.” – Deborah M. Gordon

“Social insects work without supervision. In fact, their teamwork is largely self-organized, and coordination arises from the different interactions among individuals in the colony. Although these interactions might be primitive (one ant merely following the trail left by another, for instance), taken together they result in efficient solutions to difficult problems (such as finding the shortest route to a food source among myriad possible paths). The collective behavior that emerges from a group of social insects has been dubbed swarm intelligence.”

Eric Bonabeau synthesizes the concept of  Swarm Intelligence in this phrase:

“The emergent collective intelligence of groups of simple agents.”

Simple creatures like ants following simple rules, each one acting on local information, can perform incredible actions. No ant sees the big picture, no ant tells any other ant what to do, maybe some species have some differents, but the bottom line is that no leadership is required, no control is required.

“In essence, we believe that social insects have been so successful–they are almost everywhere in the ecosphere–because of three characteristics:

Biologists speak about a “Superorganism” an organism consisting of many organisms capable to use a collective intelligence unknown to the single individual.

Despite this word was originally used by James Hutton (1726-1797), the “Father of Geology”, speaking about Geophysiology (the study of Earth like a Superorganism), the term is now usually adopted to indicate a social unit of eusocial animals, where division of labour is highly specialised and where there is not centralized control.

James Hutton  considered Earth to be a superorganism and that physiology could be the only way to study it properly.

“Geophysiology” was then popularized by James Lovelock in his writings on the “Gaia hypothesis“.