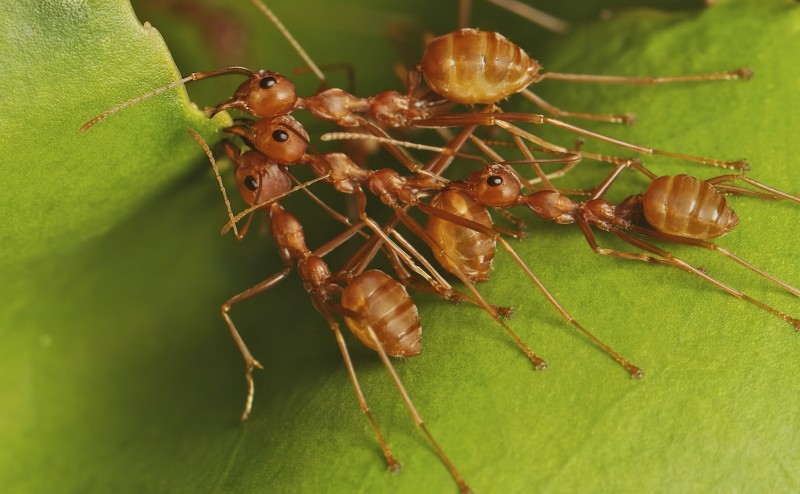 Dr. Luiz Carlos Forti,  professor at UNESP (Sào Paulo State University, Brazil), leads the excavation of a huge subterranean megalopolis built by Leafcutter ants that spanned an area of more than 538 square feet and delved 26 feet into the earth.

Leafcutter ants live primarily in the tropical and semi-tropical rainforests of South and Central America.They play a key role for the ecosystem, both in the aeration of the soil and in the redistribution of nutrients in the forests they inhabit. (The Leafcutter Ants: Civilization by Instinct,  by Bert Hölldobler, Edward O. Wilson, Harvard University).

Leafcutter ants “cut and process fresh vegetation (leaves, flowers, and grasses) to serve as the nutritional substrate for their fungal cultivars”.

We can consider the leafcutter ants as one of the largest and most complex animal societies on Earth after humans. In a few years, the central mound of their underground nests can grow to more than 30 m (98 ft) across, with smaller, radiating mounds extending out to a radius of 80 m (260 ft), taking up 30 to 600 m2 (320 to 6,460 sq ft) and containing eight million individuals

Following very simple rules ants can achieve incredible results through primitive interactions among the individuals in the colony. Despite there is no centralized control structure dictating how individual agents should behave and these interactions could be primitive, taken together they result in efficient solutions to difficult problems.

These castles of clay, relative to the individual termites that helped build them, are air-conditioned structures immensely larger and more sophisticated than the vast majority of human buildings.